photo by the author

The 2015 Performance Racing Industry (PRI) show in Indianapolis featured a special exhibit of racing history entitled “The Evolution of the IndyCar – an Exhibition of Speed” co-sponsored by PRI and the Indianapolis Motor Speedway Hall of Fame and Museum.  We featured one of the significant cars displayed – the Sampson “16” Special - last month. 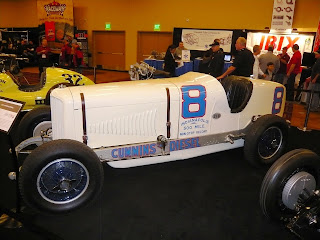 1931 Cummins Diesel photo by the author

Today we share the story behind another IndyCar on display at PRI 2015 - the 1931 Cummins Diesel Special.  This car is an example from the bygone era of racing when the Indianapolis Motor Speedway was a proving ground for automotive innovation as its founders intended instead of the site of single chassis/rental engine “spec” racing.

The most significant day in the history of the Cummins Engine Company occurred on Christmas Day 1929, when Clessie Lyle Cummins took company financial patron William Irwin for a ride around Columbus Indiana in a used 1925 Auburn Sedan fitted with a Cummins model ‘U’ marine engine.

Until then, diesel (or oil engines) which used compression ignition rather than spark ignition, were large and bulky and mainly used for stationary or ocean-going power plants.  The diesel-powered Auburn is regarded as the first diesel-powered automobile in the United States.  To promote the durability of the company’s newest line of diesel engines designed for use in boats, automobiles, tractors, and trucks Clessie took the Auburn on tour.

Clessie Cummins drove the Auburn powered by the  model “U” engine which featured enclosed valves, pressurized lubrication and disc type fuel injection to the New York Auto Show, and then after the show put the Cummins engine into a 1925 Packard roadster and drove it to to Daytona Beach Florida.

After removing the fenders headlights and windshield, the Packard roadster set an 80.389 mile-per hour (MPH) world speed record for diesel powered cars on the sandy ocean side course.

Despite this success, Cummins knew he needed a real race car to demonstrate his  Model U “oil engine,” which made extensive use of lightweight ‘Duralumin,’ an alloy of aluminum, copper, magnesium and manganese, and produced a reported 10 horsepower per pound.

Clessie talked his friend August Duesenberg into modifying a Duesenberg Model A pressed steel ladder-style frame to accept the Cummins Model ‘U’ 360 cubic inch 4-cylinder engine which was cloaked in a stripped down Model A race car type body.   On February 7 1931, Clessie in the new Cummins creation set a new land speed record of 100.75 MPH for diesel powered cars at Daytona Beach. Now Clessie set his sights on a return to the Indianapolis Motor Speedway after 20 years  as legend has it that Clessie had served on the crew of Ray Harroun’s 1911 ‘500’ winner as an employee for Nordyke Marmon & Company.

In 1929 the new owner of the Indianapolis Motor Speedway, Eddie Rickenbacker had devised instituted a new rules package for the 1930 Indianapolis ‘500’ which was to quote the rules “for cars susceptible of adaption from production car chassis,” or “development cars that embody new engineering principles or adaptions as contrasted against what may be termed "normal" cars.”

Although 85 years later, contemporary historians derisively refer to the Rickenbacker/AAA (American Automobile Association) 1930 rules package as the “junk formula,” as it primarily meant conversions of passenger cars. However, the development provision in the rules package meant Speedway officials could make provisions for Cummins “oil burner” entry.  But before it could make the Indianapolis 500-mile race starting field, the Cummins had to be fitted with a two-man race car body, as  the Junk Formula  required riding mechanics, and then the Cummins had to be approved as a ‘special engineering entry’ by the AAA Race Technical Committee. The committee ruled that in order to compete in the Indianapolis ‘500,’the Cummins diesel racer had to average over 80 MPH over its 10-mile 4-lap time trial run and was not eligible to receive any prize money. 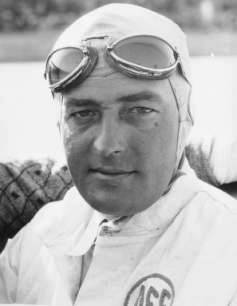 On Saturday May 23 1931, 32-year old driver Dave Evans of Evansville Indiana with his 39-year old riding mechanic, Thane Houser of Honey Creek Indiana, drove the #8 Cummins Diesel onto the course, the first car to test the uneven brick 2-1/2-mile course for the 1931 ‘500’ time trials. Evans had been racing since 1925, with most of his early years spent driving for the Duesenberg team on the horrifically dangerous high-banked board tracks of the nineteen twenties.  Houser started as riding mechanic then graduated to driving but drove but only in five races in six years before he returned to a riding mechanic role with Dave Evans in the 1930 Indianapolis ‘500’ when the pair finished sixth.

The pair surprised many observers as the 3389-pound Cummins machine (only Cliff Bergere’s Elco Royale Reo-based monstrous machine was heavier) posted a 96.871 MPH average, fast enough to satisfy the technical committee’s requirement but the which proved to be the eighteenth and slowest time of the day.

Unfortunately for the day’s final and fastest qualifier, defending race winner Billy Arnold, a brake control rod had fallen loose during his time trial run in the Miller-Hartz Special, and the Chief Steward, supported by the Technical Committee, disqualified Arnold’s apparent pole position winning run, citing the rule that cars “must be completely assembled.”    Arnold’s disqualification moved the Cummins Special up to 17th starting position in the 40-car field for the 1931 Decoration Day Classic. 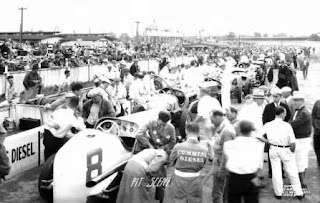 The start of May 30 1931 International  500-mile Sweepstakes  saw the slowest car in the field, the Cummins with a 96 MPH qualifying run, start side-by-side in the sixth row next to the fastest car in the field, Arnold’s Miller-Hartz which has posted a 116.08 MPH 4-lap average speed. The strategy of the two teams at the drop of the green flag could not have been different - the Cummins team intended to complete the 500-mile test without making a pit stop, while Arnold wanted to get to the front of the field as fast as possible lead as many laps as he could and post a second consecutive victory.  In 1930, Arnold had dominated the ‘500’, as he led 198 laps and became the first driver to win the ‘500’ at an average speed of over 100 MPH.
At the drop of the green flag, Arnold in the Miller-Hartz charged and seized the lead by lap seven then proceeded to build up a five-lap lead before an axle snapped on lap 161 and the Miller-Hartz crashed heavily in turn four. Arnold suffered a broken pelvis, his riding mechanic Spider Matlock suffered a broken shoulder and a loose wheel from the Miller-Hartz rolled off the Speedway grounds and killed 12 year old Wilbur Brink who playing in the yard of his parents’ home at 2316 Georgetown Road.

Meanwhile, Evans and Houser had stuffed extra padding into the cockpit of the Cummins Diesel and settled into a steady pace and finished the race without a pit stop in a respectable 13th place, just 37 minutes and 41 seconds behind winner Louis Schneider in the Bowes Seal Fast Special. Although it started the race as the slowest qualifier, it finished the 500-mile grind with an average speed of 86 MPH ahead of two other finishers.

The purpose of Cummins’ participation was not to demonstrate absolute speed, but reliability and economy. Those points were well proven as post-race inspection found that the Cummins engine consumed just $1.40 of ‘furnace oil’ fuel and one quart of lubricating oil to complete its non-stop 500-mile run.

Clessie Cummins was ecstatic at the performance of the #8 Cummins Diesel, and had the car fitted with lights, a windshield, canvas top, and side-mounted trunk for a triumphant tour of Europe to drum up business. The Cummins car was shipped to Cherbourg France via the US Lines’ SS Leviathan and visited England, France, Italy, Belgium, Switzerland, and Germany on its 1931 Summer/Fall tour. 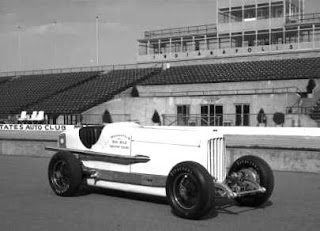 The #8 Cummins Diesel was eventually restored in 1969 to its as-raced 1931 appearance and is on permanent loan to the Indianapolis Motor Speedway Hall of Fame and Museum which provided the car for the PRI 2015 display.

Clessie Cummins returned in time to return to the Indianapolis Motor Speedway to attempt an audacious non-stop truck record run. With a truck fitted with an 8000-gallon fuel tank and powered by the new 125 horsepower Cummins model ‘H’ six cylinder 382-cubic inch diesel engine Cummins intended to drive non-stop around the 2-1/2-mile Speedway and set another record. 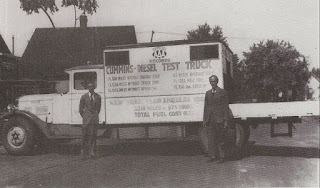 This photo of the record-breaking Cummins Deisel truck
appeared in The Diesel Odyssey of Clessie Cummins, by Lyle Cummins,

With a team of three drivers- Clessie, Dave Evans and Ford Moyer, the first record attempt began at 2 PM local time on December 12, 1931, but came to a premature end two days later when a wheel bearing failed with just 1035 miles completed.   A second run began on December 14, and ended two weeks later after a total of 13,535 miles or 5,414 laps around the Speedway completed non-stop at an average speed of 43.97 MPH.

The non-stop run of the #8 Cummins or the record-setting endurance truck run did not end the company’s involvement at the world’s greatest race course, as the Cummins Engine Company returned to the Indianapolis Motor Speedway three more times with diesel-powered ‘500’ entries.

In 1934, Cummins entered two cars that used Duesenberg chassis and which appeared the same but which had distinctly different engines. One entry that carried race number 5 was powered by a two-cycle diesel and the other which carried race number 6 was a conventional four-cycle diesel engine driven by Dave Evans with John ‘Jigger’ Johnson alongside. The torque of the four-cycle engine broke the #6 car’s transmission on the first pit stop on lap 81. The two-cycle powered car #5 driven by Harwell “Stubby” Stubblefield and mechanic Bert Lustig finished twelfth. 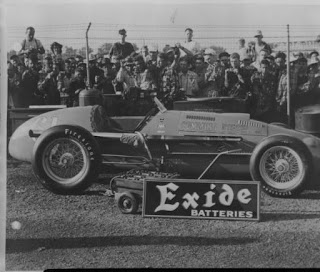 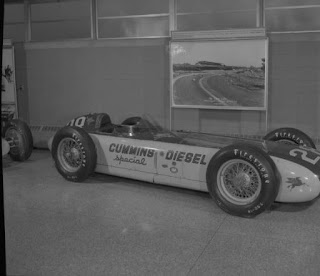 In 1952, Cummins entered a radical racer with the turbocharged 401 cubic inch diesel engine laid on its side in a Frank Kurtis built chassis. Former Bay Area midget champion Fred Agabashian qualified the red and yellow ‘Cummins Diesel Special’ for the coveted pole position and briefly held the track’s one and four lap qualifying records.  Although it was a sensation in qualifying, and its design inspired later roadster creations at the Speedway, the Cummins Diesel entry proven uncompetitive in the race on Memorial Day largely due to turbocharger lag and was retired after 71 laps.

Cummins reached Victory Lane at the Indianapolis Motor Speedway in 1987 albeit not with a diesel powered entry, but as a sponsor which is part of an improbable story.  Three-time ‘500’ winner Al Unser started out the month of May 1987 without a car to drive, and only got his chance to qualify for the Indianapolis ‘500’ after Danny Ongais destroyed his ‘Panavision/Interscope/Holset’ Penske PC-16/Chevrolet entry in practice, suffered a concussion and was not medically cleared to drive.

After just three days of practice, Unser qualified for the 20th starting position in the 1987 Indianapolis ’500’ in the Cummins/Holset Turbo sponsored 1986 March chassis powered by a Cosworth engine which began the month of May in a hotel lobby as a show car.  On May 24, Al Unser dodged a first lap first turn spin by Josele Garza, ran a steady race with the leaders, then after Mario Andretti, then Roberto Guererro suffered problems, Unser moved in the lead for the last 18 laps to win his fourth Indianapolis ‘500,’ and Cummins’ first.

Posted by Kevin Triplett at 8:45 PM